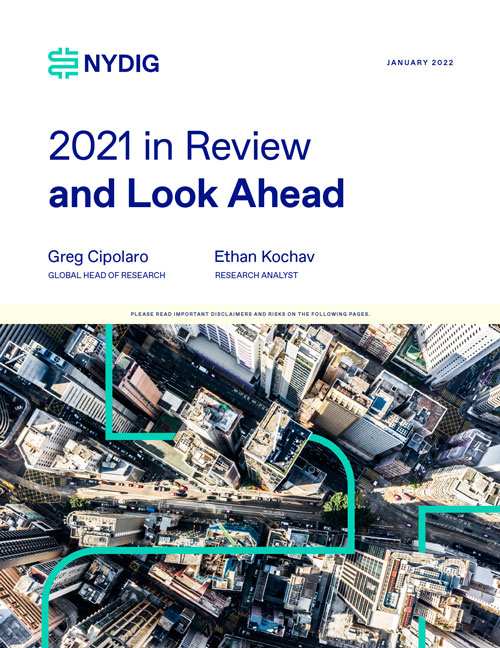 Bitcoin opened 2021 with strong performance, carrying on its momentum from the previous year. The price doubled in Q1 as the digital currency appeared to be rapidly institutionalized, with the first bitcoin exchange-traded fund (ETF) beginning to trade in Canada, MicroStrategy, Square, and Tesla all announcing big bitcoin purchases (and Tesla accepting bitcoin payment for its vehicles), and Visa entering the space through multiple products and services. Performance reverted somewhat in Q2 after Tesla announced it would stop accepting bitcoin over environmental concerns and China announced bans of mining and trading of cryptocurrencies, but the summer saw a renewed rally following “The B Word” conference featuring a conversation with Elon Musk, Jack Dorsey, and Cathie Wood on the value of Bitcoin. This rally continued through early November, after which performance stalled and began drifting lower into the end of the year. In all, bitcoin was up 57.2%, well above any other asset class for the year.