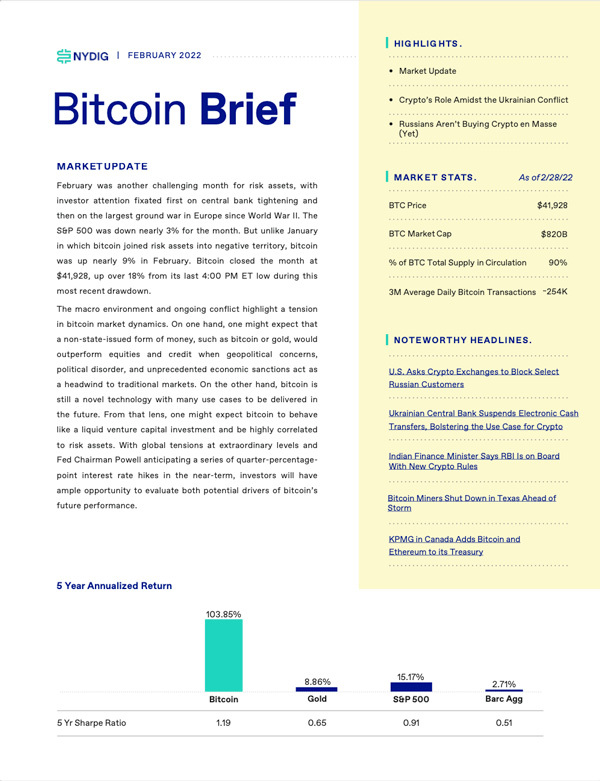 February was another challenging month for risk assets, with investor attention fixated first on central bank tightening and then on the largest ground war in Europe since World War II. The S&P 500 was down nearly 3% for the month. But unlike January in which bitcoin joined risk assets into negative territory, bitcoin was up nearly 9% in February. Bitcoin closed the month at $41,928, up over 18% from its last 4:00 PM ET low during this most recent drawdown.

The macro environment and ongoing conflict highlight a tension in bitcoin market dynamics. On one hand, one might expect that a non-state-issued form of money, such as bitcoin or gold, would outperform equities and credit when geopolitical concerns, political disorder, and unprecedented economic sanctions act as a headwind to traditional markets. On the other hand, bitcoin is still a novel technology with many use cases to be delivered in the future. From that lens, one might expect bitcoin to behave like a liquid venture capital investment and be highly correlated to risk assets. With global tensions at extraordinary levels and Fed Chairman Powell anticipating a series of quarter-percentage-point interest rate hikes in the near-term, investors will have ample opportunity to evaluate both potential drivers of bitcoin’s future performance.