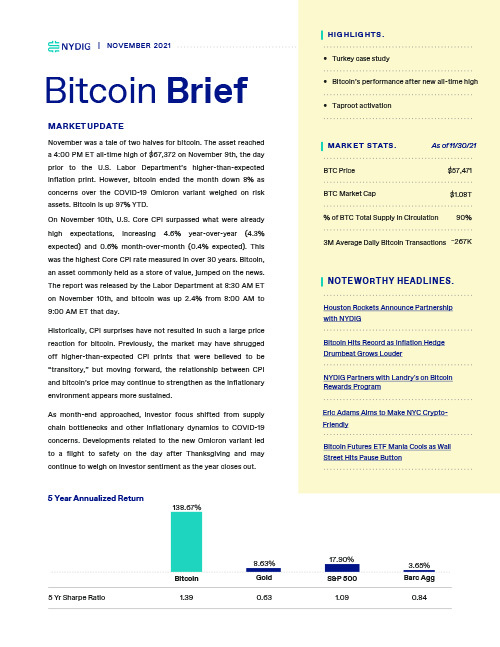 November was a tale of two halves for bitcoin. The asset reached a 4:00 PM ET all time high of $67,372 on November 9th, the day prior to the U.S. Labor Department’s higher-than-expected inflation print. However, bitcoin ended the month down 8% as concerns over the COVID-19 Omicron variant weighed on risk assets. Bitcoin is up 97% YTD.

On November 10th, U.S. Core CPI surpassed what were already high expectations, increasing 4.6% year-over-year (4.3% expected) and 0.6% month-over-month (0.4% expected). This was the highest Core CPI rate measured in over 30 years. Bitcoin, an asset commonly held as a store of value, jumped on the news. The report was released by the Labor Department at 8:30 AM ET on November 10th, and bitcoin was up 2.4% from 8:00 AM to 9:00 AM ET that day.

Historically, CPI surprises have not resulted in such a large price reaction for bitcoin. Previously, the market may have shrugged off higher-than-expected CPI prints that were believed to be “transitory,” but moving forward, the relationship between CPI and bitcoin’s price may continue to strengthen as the inflationary environment appears more sustained.

As month-end approached, investor focus shifted from supply chain bottlenecks and other inflationary dynamics to COVID-19 concerns. Developments related to the new Omicron variant led to a flight to safety on the day after Thanksgiving and may continue to weigh on investor sentiment as the year closes out.