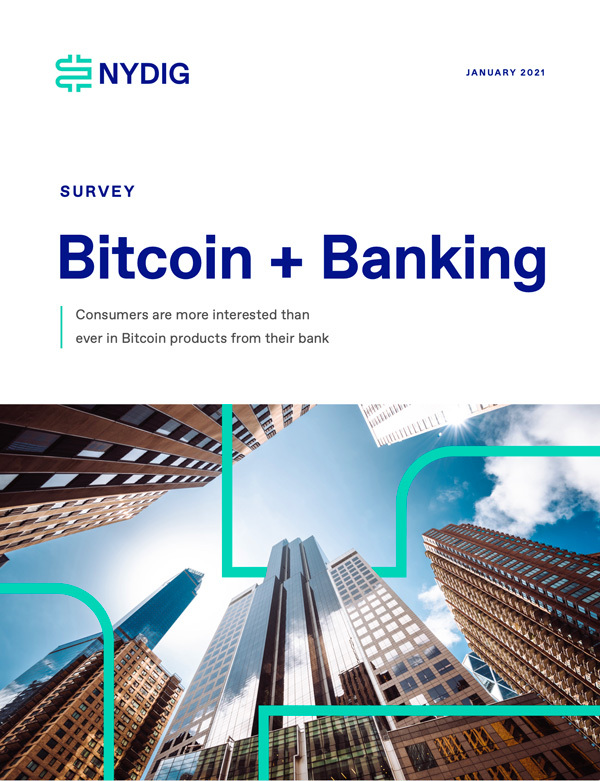 Consumers are more interested than ever in Bitcoin products from their bank. Our findings suggest that 46MM+ Americans own Bitcoin today. That’s more than 22% of adults over the age of 18. The increasingly widespread adoption of Bitcoin, with little involvement from banks, has caught many by surprise. Some banks may wonder if consumers simply don’t want to intermingle the two. However, our consumer research points to a vastly different conclusion.

We think it is safe to say that the Bitcoin “train" has left the station. But the passengers want banks–their trusted financial providers–to get them on board. The data shows that not only would consumers feel more comfortable buying and holding their Bitcoin with a bank, but that they desire BIGGER and BOLDER opportunities. NYDIG believes that Bitcoin + Banking should be SYMBIOTIC.

Banks can play a pivotal role in the transformation happening in the financial industry. Yes, banks can help consumers feel safe investing and storing their Bitcoin; it is good for consumers, good for banks, and good for Bitcoin. However, we believe that banks can play an even more critical role in the evolution of Bitcoin by making it accessible in novel ways. Up to this point, Bitcoin could only be acquired through investing in it or mining it. With the power of Bitcoin + Banking, Bitcoin can be made accessible in new and creative ways, like interest payments or rewards programs. We believe that a strong financial system is one based on equity and that forward-thinking banks can deliver just that.