The Power of Bitcoin's Network Effect 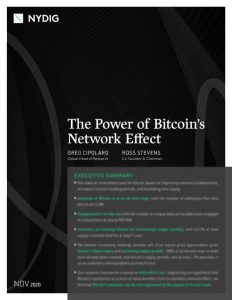 Increasing fundamental demand combined with a fixed supply and automatically declining supply growth makes a compelling case for bitcoin as an alternative investment for institutional investors.

Examining addresses that hold bitcoin balances and daily active addresses, we show that network adoption and network usage are each growing. Regarding supply, we show average investor holding periods rising, with the percentage of total bitcoin supply held for at least one year recently hitting an all-time high. We also see record highs in the number of addresses that control large bitcoin balances, which we define as at least 1,000 bitcoins. This development supports our view, and direct experience at NYDIG, that bitcoin is being increasingly adopted by institutional investors.

These positive network fundamentals are set against the backdrop of automatically dwindling new bitcoin supply and an ultimate cap of 21M bitcoin. Bitcoin’s supply growth, which asymptotically approaches 0% over time, is now down to 1.3% annually, on par with the annual growth in gold supply. While far from perfect, gold is bitcoin’s closest real-world analogy. The ultimate supply of bitcoin is fundamentally limited by the design of the system itself and cannot be increased regardless of its value or the level of demand. One critical insight: bitcoin is the first store of value in history in which its supply is entirely unaffected by an increase in its demand.

To value bitcoin, we apply Metcalfe’s Law, which states that a network’s value is proportional to the square of the number of its users. Applying Metcalfe’s Law to Bitcoin’s network, we find that bitcoin’s historical valuation levels are well explained by the square of its addresses. Applying this relationship to potential future network growth of 15%-25% per year suggests a price level range of $51,611 – $118,544 in 5 years.